I haven’t blogged much this last year. I’m on my sixth move in half as many years, and blogging has kind of taken a back seat with the biannual packing and unpacking.

I’ve attempted twice to switch from WordPress to a statically generated site using one of the various tools available including Pelican, Octopress, and Jekyll. I find editing blog posts online to be an impediment for some reason. When I saw that a new version of Blogo had been released at half-price, I decided to take the plunge and try it out. This is my first post with it.

At first, I liked it. It doesn’t offer a ton of features, but that’s OK. I don’t expect a tool like Blogo to support all the things I can do to a post in WordPress with its vast assortment of plugins. I don’t mind having to jump into WordPress for things like code snippets and other things that require plug-in functionality. It would be nice, however, if it could sync categories and tags so that they auto-fill in the post editor so that I don’t have to go to my site to remember if my Python tag was capitalized or not. Getting images where I wanted them in the post, however, was frustrating.

My first attempt to post this article was not a success.

This was odd, because Preview worked just fine. I pinged the Blogo folks, and they asked me to try posting without images, which seemed to work. I updated the permissions on my wp-contnet/uploads folder and tried again. This time, it got some of the images uploaded with automatically generated names, but then kind of hung there. I never did get the post fully updated, and in the end, had to drop back into WordPress to get the post finished. Its too bad. I had high hopes for Blogo 2.

The basic game mechanic of Savage Worlds involves trying to roll a target number or better with a 4, 6, 8, 10, or 12-sided die. 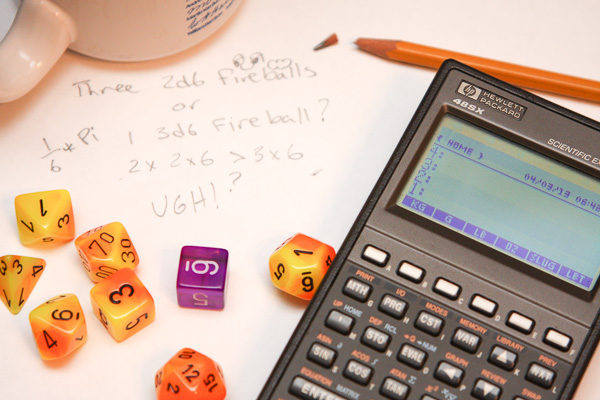 The die can ace if the player rolls the maximum number on it, allowing the player to roll again, adding the result to their original roll. In other games, this mechanic is often referred to as exploding dice or open-ended dice, as the player may continue to roll until they do not roll the max value. For example, if you rolled an 8 on an 8-sided die, you could keep rolling until you did not roll an 8.

Additionally, player characters and powerful non-player characters are considered wild cards. Wild cards roll an additional wild die, typically a 6-sided die, and the player uses the better of the two rolls. This wild die can also ace. For example, if you rolled another 8-sided die along with a wild die, you might get a higher result on the d6 than the d8. 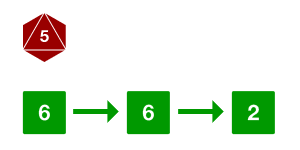 As mentioned on other sites, this makes for some interesting probabilities. However, many of these articles either don’t provide a way to calculate the odds of these mechanics, or they provide a more mathematical explanation that might be hard to comprehend if you’ve been out of college for a while like myself.

This article attempts to explain these probabilities in a more accessible way using a close analog to dice, rational numbers in the form of fractions, along with some Python code to aid in calculating probabilities easily.

Python contains a fractions module that makes coding this trivial.

You can compare the results of your calculations using tools such as Troll. Values may not match exactly, however. The code above performs its calculations with rational numbers before converting to floating point values for the final answer. If we were to use floating point numbers for the calculations as well, rounding errors due to floating point math imprecision would introduce small variances in the answer. This is most likely what is happening with Troll.

The Python code to calculate the probability of hitting a target number or better with a given dice and a wild die builds upon the code for exploding die.

With the two Python functions, you can accurately calculate the probabilities to hit a range of target numbers with assorted dice.

Statistics in a Nutshell, 2nd Edition

Chapter 2 of O’Reilly’s Statistics in a Nutshell covers probability and was a useful resource in understanding the math from a more practical angle. Specifically useful was the section on calculating the probability of mutually exclusive events starting on page 32.

The Python code for this article can be found in a single script in this gist. The data for the charts above was created using the script as is available in this CSV file. The script has been tested with Python 2.7.3 and 3.3.0.

I love Python because of things like random.choice, a useful little method that allows you to create mission-critical functionality with very little code. For example, who doesn’t need a random Kung Fu move name at least once a week? I know I do. With Python, its a snap.

Hi, my name's Dale, and this is my tech blog. Read More…